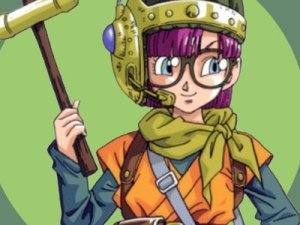 Chrono Trigger’s Lucca was the first video game character I could really connect with.  She had big glasses, for starters, and she was smart and bookish, plus she wore sweeeeeeet boots.  And Crono’s ignoring of all of these great qualities in favor of busty blonde bimbo princess Marle was a good lesson for my late teens/early 20s: some basic bitch with a high ponytail and a tube top will always get the man you want*. (Eponine was a great tutor for this lesson as well).  My happiest snow days were spent playing that game on the TV in my mom’s bedroom, where I could surround myself with pillows and play in (relative) solitude.

I got on a Chrono Trigger kick awhile back; buying up old issues of Nintendo Power and reading the Boss Fight Books entry on the game.  I even played the unofficial sequel, Crimson Echoes, which was good until the stupid ending left Lucca behind to clean up idiot Marle’s mess because she’s a shit-for-brains queen. (and also I had a weird Marle glitch; serves the hussy right). Time travel is my favorite sci-fi concept, as evidenced by my great affection for Back to the Future, and I have always loved the look of skeleton keys and old clocks, of maps and worn paper.

It was time for a new notebook.

I finished Dutch’s last signatures with a scene from a piece Matthew and I are working on.  I needed a notebook that would be ready for anything; a scrap of poem, a scene from a dream.  I wanted this one to have the feel of something that traveled long distances, that is sturdy but beautiful, that balances between the an antique and the new feel.  And she would be named Lucca in tribute. 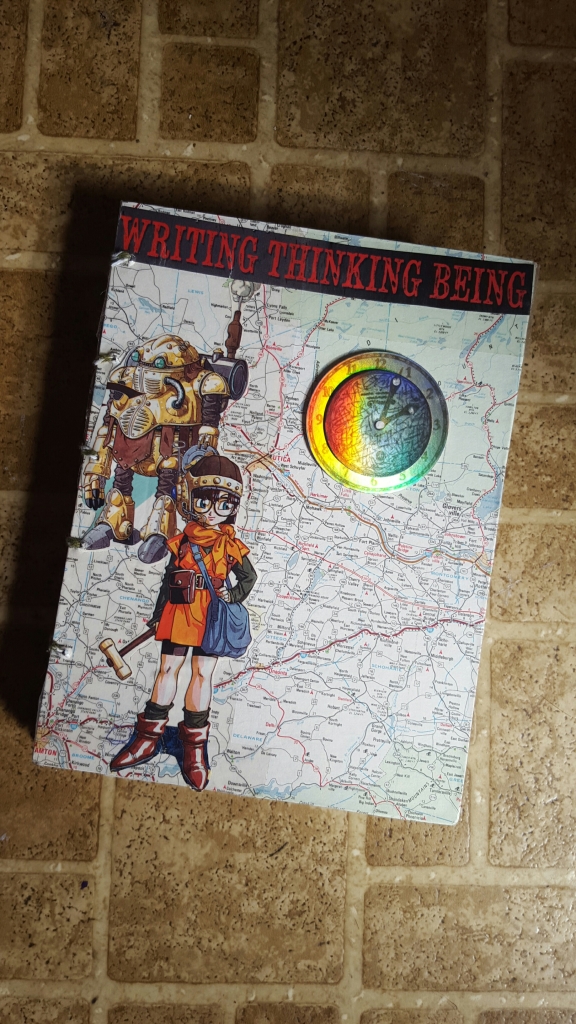 Because I started Lucca before I made Mona, I didn’t use endpapers, but I did sew an envelope into the back to keep track of stickers and pictures I intend to glue in.  I wrapped the covers better, and even got to use a cleaned “You Deserve a Donut” bag from the former Wenchell’s Donuts on May Ave. in Oklahoma City.  Lucca’s picture, cut from a 1996 issue of Nintendo Power, adorns the front cover, as does a 3D clock sticker.  The Nintendo Power issues I got off Ebay were some of the best ephemera purchases I have ever made.  I’ve been mailing random articles to people and it always makes them smile. 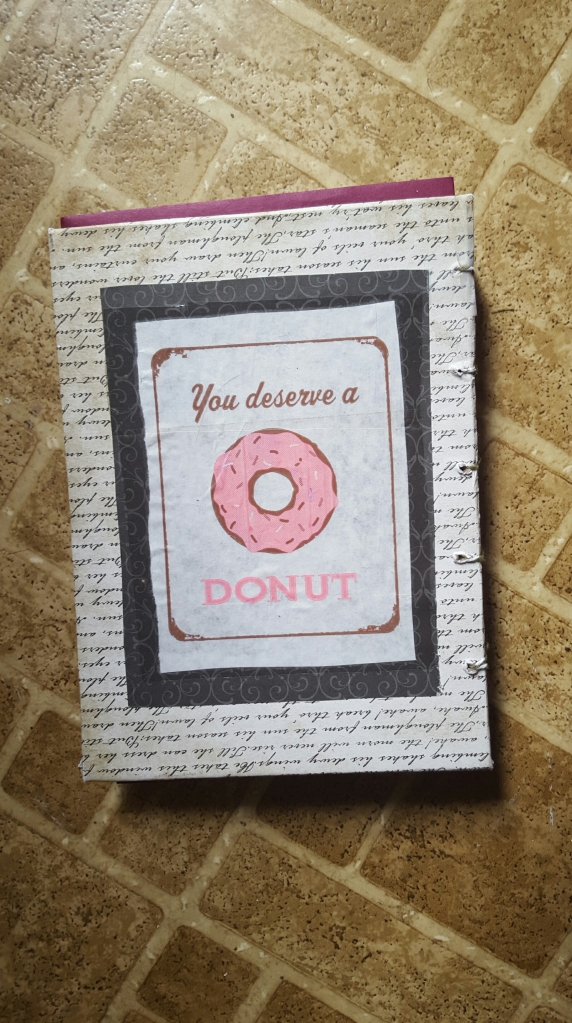 I used a variety of papers for the signatures; parchment, and map pages, as well as origami paper on the spines.  I’ve become quite obsessed with soft sketch paper, finding it a perfect match for the gel ink I use to write while creating a wonderfully tactile writing experience, but I wanted the color contrast of the thin map pages and the slick parchment to create a diverse landscape of page textures.  To me, there’s nothing more thrilling in a notebook than to turn the page and find yourself writing on a new surface.  It’s what makes a notebook unique and exciting.

I had every intention of finally learning French stitch, but I thought it would distract from the colored spine, so I went with my old coptic standby.  I’m getting really good at it too, which means it’s probably time to learn something new.

Right now I’m between novels, enjoying the release of The Big Rewind and waiting to submit my next novel proposal.  So I’m letting myself write whatever comes to me, regardless of whether or not I think it will ever develop into anything.  It’s a fun place to be in.

*I eventually did marry the man I wanted most of all, so it all worked out.