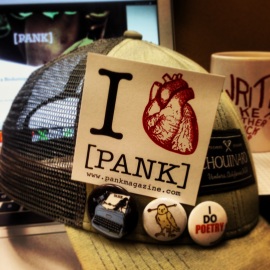 PANK announced today that they would be closing down at the end of this year.  This is a drag on multiple levels.  One, they always had the best buttons at AWP and two, because being published by PANK is an awesome experience for any writer.  I would know — they picked up my story “Hotel Jesus” in March 2011.

“Hotel Jesus” was one of my turning-point stories where I began to see that I could play with form and format.  I allowed myself to explore the narrative voice rather than dictate it.  It’s a story driven by language and image, rather than plot, and it allowed me to start looking at characters who exist in the grey areas of morality.

It’s also hopelessly fucking sad, and I can’t remember what sort of terrible nonsense I must have had going on when I wrote it.  But I haven’t written anything like it since, which is too bad.  It’s a fascinating little piece.

Fare thee well, PANK.  You will be much missed.