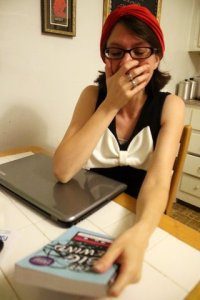 My galley copies of The Big Rewind arrived yesterday and…wow.  They’re incredible.  To actually hold my own book in my hands, to see my name on a cover is such a thrill that I lack the words to describe it.  For the whole night I kept picking it up and turning it over in my hands, thinking this is really happening.  That’s my name!  On the cover of a book!  Those are my words, my sentences, my scenes all laid out in actual, book-like form!  Eee!  It doesn’t seem real.

And yes, I cried when I opened the box.

And the best part is that my husband, Ian, who hasn’t read the book in any form, is devouring it.  Not just because I wrote it (he’s very honest which stories of mine he loves and which ones aren’t his thing)  but because he’s actually enjoying the book.  I had to banish him to the other room last night because I wanted to go to sleep and he couldn’t put it down.  That might be the best endorsement I’ve gotten so far!

In an effort to make some sense of the chaos that is my existence, I’ve been on this big tear of organizing ephemera into more chronological categories.  I just recently finished the photographs…and now it’s onto the mix CDs.

And, whoo-boy, are some of these embarrassing.

My earliest mix CDs were similar to radio tapes — collections of random songs culled from borrowed CDs.   A little Zevon, some 80’s stuff, a Lenny Kravitz song I must have liked but have no recollection of ever listening to.  Some of these CDs are 10 tracks long, not creatively named or anything.  My dad had a CD burning machine that you programmed tracks into, but if you didn’t fill CD, it would just repeat the last track until the end of the CD, which explains how I ended up with 7 plays of Mr. Mister’s “Broken Wings” on a CD titled Totally 80s Mix (Train would be so proud).

The 80s stuff is almost cliched nowadays, but it’s the 90s-2000s that are really mega-dorky.  One mix, titled Wussy Songs No One Must Hear contains The Corrs, Faith Hill and Celine Dion.  I try to pretend ‘m so fucking cool, with my Tom Waits and my Warren Zevon and my suitcase record player, but I have Natalie Merchant’s “Wonder” and “Thank You,” two songs specifically designed by space-robots in broomstick skirts to be played as a Lilith Fair encore.  All of my nerd-punk Talking Heads posturing is completely undone by two John Mayer songs (“Clarity” and “No Such Thing”) and Jason Mraz’s “The Remedy” on my Chill mix from my junior year of college.

But it’s fun, you know?  Hearing all these songs I haven’t heard or thought about in a decade or so — my deep, Freshman-year love for Lifehouse’s “Hanging By a Moment” or how Dave Matthew’s Band’s “Trippin’ Billies” is a pretty good song…and trying to figure out at what time in my life I would have come across Good Charlotte’s “Festival Song” and thought “Yeah, I want to listen to that on a 4-hour bus ride.”

There are party mixes for 80s parties and Halloween parties and my infamous Sin City shindig.  There are compilation mixes and theme mixes, driving mixes and archived copies of CDs I made for other people.  There are songs I listened to yesterday and songs I haven’t heard in ages.  It’s one more way to trace my history, to put order to my past…only this time, I can dance to it.

Jason and I are doing this MixCD thing pretty hard.  It’s a language we always spoke, a means of communicating what neither of us were very good at saying aloud.  In the two months since we’ve been back in touch, we’ve made a total of seven albums, (four from me, three from him).  It’s a tad obsessive.

But just because we didn’t speak for seven years didn’t mean that there weren’t songs that didn’t remind me of him that whole time;  The Killers “Miss Atomic Bomb” and The Smiths “Rubber Ring” and The Cure’s “Cut Here” that made this Cold War almost slightly bearable.  Because that’s what I do, that’s how I process emotion.  Elton John was onto something when he sang “If someone else is suffering enough to write it down/When every single word makes sense’Then it’s easier to have those songs around”

But now Jason and I are back to being cool, there’s just one teensy little problem: What do I do with all these sad songs?

Any mix-tape enthusiast knows that you can’t just pretend a song doesn’t remind you of someone anymore.  It’s not an emotional connection you can just flip on and off.  After seven years of playing Go West’s “King of Wishful Thinking” and crying whenever I got nostalgic, I wasn’t going to not be able to think of him when I heard it.  I don’t have any emotional use for these songs anymore,  but they’re too good to just lock away.  And I certainly can’t give them to him; we’re past the stage of past sorrows and regrets.

Ultimately, I gave him a few of my broken-hearted tunes as a way of illustrating “This is how much it sucked when you were gone.”  I let Morrissey sing my apology on “Bigmouth Strikes Again” and Tom Waits lament “Bad Liver and a Broken Heart.”  I let Warren Zevon beg him back with “Reconsider Me” and, luckily, he did just that.  And in time, I’m sure his memory will fall away from Nick Cave’s “Nobody’s Baby Now” and Stroke 9’s “Letters.”

But until then, well, sad songs say so much.