I have friends that leave reviews constantly.  Liked the restaurant we ate at? Write a review on Yelp.  Hated the movie we saw?   A full rant is up on Facebook that night.

The phrase “Everyone’s a Critic” has never been truer.  Between Amazon and Yelp and, I dunno, MoviePoopShoot, everyone can tell you exactly what they think about everything.   Especially when we hate something.  Then we cannot shut up about it.

Me, I’m opting out.  I am no longer leaving bad reviews.

For me, writing a bad review is bossy.  It’s saying, “I’ve decided, in my infinite wisdom, that no one else should like this book/bar/movie/album because it did not please me.”  But tastes are subjective, and people have every right in the whole world to enjoy Ready Player One or The Force Awakens, even if I didn’t.

END_OF_DOCUMENT_TOKEN_TO_BE_REPLACED

The Big Rewind is OUT!  Buy it at your local bookstore! Buy it on Amazon!  Buy it at Barnes & Noble!  Buy one for yourself, and another for someone you respect and admire!

Packed The House at the Green Toad Bookstore!

And if you love it, spread the word.  If you don’t, well, here’s hoping you find something ELSE you love and can talk that up instead!

2 a.m. last night found me on my couch, eating fun-sized boxes of Milk Duds and playing Lunar: Silver Star Story on the PS2 Heather left for me after we filmed the book trailer for Amber Benson’s Witches of Echo Park.  I couldn’t sleep, partially because I come from a long line of insomniacs and partially because my husband has a cold, so he was snoring and carrying on.  I was strangely happy in this moment, wrapped up in a fuzzy blanket, having taken control of my insomnia rather than freaking out, like I normally do.

About a week ago, I decided, in my ongoing quest to become a super-productive human with an awesome house who writes a novel every single morning, I started doing Buzzfeed’s “Morning Person Challenge.”  Now I’m generally a pretty decent morning person; by 7 a.m. I have my coffee and am writing at my desk/kitchen table, but I occasionally get in these fits where I decide that my life could somehow be more awesome/pretty/productive and then throw everything into disarray and then break down crying.  There’s a Basic Bitch inside me trying to fight her way out, like a demon.

END_OF_DOCUMENT_TOKEN_TO_BE_REPLACED

I’ve never been much of a poet.  I thought I was, until I took a poetry class in college, taught by a Vietnam Vet who was never any less than 20 minutes late to class and realized, “Nope, I suck at this.”  I have since burned/recycled every poem I have ever written.  No need to thank me.

But after I finished the first draft of The Big Rewind, I woke up one morning with curious sentences bouncing around in my skull.  I had been reading But Our Princess is in Another Castle, by B.J. Best, which restructured the way I was creating narrative as I functioned throughout the day.  Even as I processed simple tasks, I was filtering them through winding, vivid poetics.  And when I sat down to write, I would come back an hour later and have no recollection of constructing a sentence, a whole paragraph.

(It was fucking AWESOME.)

END_OF_DOCUMENT_TOKEN_TO_BE_REPLACED

(Today’s post comes from Jason Bates, author of The Littlest Spoon, which I loved.  Jay and i have known each other for years, and he’s my absolute favorite poet. He was awesome enough to do my Sunday work for me, and I hope you’ll all run out and buy The Littlest Spoon)

I’ve noticed that oftentimes Libby (who in my head always has “the Liberator” attached to her name) starts her posts with a playlist. I am not sure if those are the songs she was listening to as she wrote the post, or songs that she believes the reader should listen to while reading the post, or is it both? (it’s both) I feel compelled, not by the Liberator of course, to capture the feel of Glam Geek Writes…so with that said, here be the playlist:

“Please Play This Song on the Radio” by Nofx.

“Lock Step and Gone” by Rancid.

“I Met Her At the Rat” by the Queers.

I struggled with the legitimacy of calling myself a writer when literally anyone with a computer and the ability to type letters, numbers or random symbols could publish their very own book. I had deep conversations with friends and loved ones about “success” and “publishing” and “accomplishment”. I drank beer, alone, and bought a pack of cigarettes after almost a year of clean lungs. I dug my old “the Queers” t-shirt out of the box in the closet. I remembered that I’m a punk ass motherfucker! I paced my weather-worn deck, blowing smoke and mumbling to myself about how DIY isn’t a TV station and how Nike didn’t invent “just do it” and how I didn’t need someone else’s permission to be a writer…to be a legit poet!

I decided on a number. The number of copies of The Littlest Spoon that I need to sell in order to personally validate myself as a writer. When that number is reached, I will put my copy on the shelf alongside my favorite books.

We’ve come to the end of my blog-bomb and I haven’t even introduced myself.

Come say “hey” on twitter @BruHaHa222 or flip me off at punkswritepoems.tumblr.com

Jason will be giving away a signed copy to a random reader — leave a comment by Dec. 1 for a chance to win!

I’m kind of obsessed with Eric Powell’s The Goon these days — Ian got back into it and I got tired of hearing him snicker from the couch and not being in on the joke, sort of how he felt when I was reading Hyperbole and a Half and got laughing so hard I couldn’t breathe or explain why I was laughing.  The Goon hits all the right notes for me; neo-noir, paranormal, voodoo and old-skool zombies, violence and humor and hyper-stylized, Depression-era settings.  Plus I have a weird little crush on Franky that I can’t quite explain.

…But I just finished reading Chinatown and Holy Cats, I haven’t read a comic that awesome since The Hard Goodbye (also: I don’t read comics very often).  I actually cried at the end, when Franky’s sitting there at The Goon’s hospital bed after taking page after page of beatings while The Goon is out kicking it with Isabella.  It hit home, in a strange way.

Most people want to be the hero of their own stories.  Me, I tend to be the 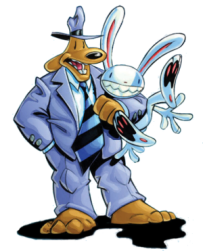 sidekick because I’m high strung and excitable and I generally need someone to keep me leveled out.   I’m the Max to Ian’s Sam, the Shane Vendrell to Matthew’s Vic Mackey.  I’m good in a fight and quick with a quip, I’m smart and I think fast and I’m good on my feet.   Great skills to have as a reporter, good skills to have when you’re trying to say, gaslight someone and weedle your way into their empire.  The downside, especially with someone like Matthew, is that damn it, sometimes you need to go in with shotguns blasting and not take so damn long to put all the chess pieces in place.

The problem with being a sidekick, however, is that sometimes, well, you get pushed off to the side.  I once got left the edge of a dance floor because Matthew got wrapped up in talking to a girl he didn’t even like, a girl we called The Jawa.

And that’s where Chinatown hit so damn hard for me.  Because when you’ve got male friends, sometimes dames get in the way.  Sometimes those dames are great, like my friend Bridget, who married my friend Eeon.  Sometimes those dames are no good, and the worst part about a no-good dame is that no one wants to hear their dame is no good.  And when you’re a dame yourself, they’ve always got that “you’re just jealous” card to play.  And sometimes I was jealous, because I was young and stupid.   But I’ve lost more than one friendship over no-good dames, and though I’ve manage to recover all of them, there were a lotta years of heartbreak in between.

So when The Goon’s mummy’d up in bandages and Franky sits down by his bedside and says “Dames come and go, but pals stick together,” I just started bawling.  Like, mascara-down-the-cheeks kinda crying.  Partially because the characters feel so real, not just bullshit neo-noir stock types like every Sin City comic after The Hard Goodbye, but mostly because it reminded me of all the times I stupidly let a dame — or anything, really — get in between me and a friend.